Dealing with Snakes on the Trail 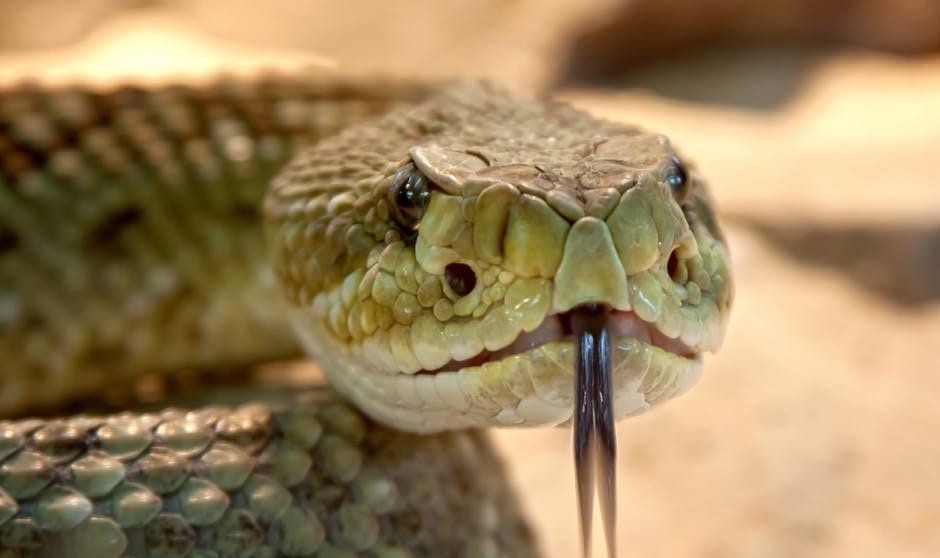 Watch out for those trail loving snakes!

Summer is here and naturally, you want to be outside enjoying the beautiful nature around us here in the Ozarks of Northwest Arkansas.  Hikers, walkers, and bikers are out in force.  Kayaks and canoes are in the waters of our beautiful lakes.  The weather is getting hot, slowly but surely.

With warmer weather, we need to start watching out for snakes in our yards and around the trails and lakes.  Yes, Arkansas does have some venomous snakes we need to be aware of.  But no need to be terrified of enjoying our natural beauty here in the Ozarks.  Employing caution and keeping aware of our surroundings will help us to stay safe from these native reptiles.

What Venomous Snakes can be found in our Area?

These are the ones to avoid: 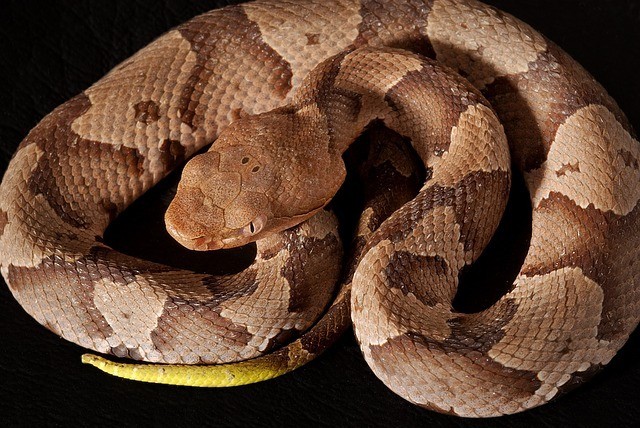 Copperheads are typically light brown to a rust color with dark hourglass bands around the body.  They have a vertical eye pupil and are it vipers which means they have “heat-sensory pits between eye and nostril on each side of head their heads.  (This enables them to detect slight differences in temperatures so that the snakes can accurately strike the source of heat which can be their prey or even you).  Copperheads are the snakes most likely to bite in the U.S.  Their venom is hemotoxic (meaning it acts by rupturing blood cells and causing swelling and tissue destruction locally and can cause septicemia [blood poisoning] and organ failure).  Fortunately, the bite of a copperhead rarely causes death

These snakes have heads that are wider than their bodies and their eyes are vertical and heads are boxy looking
Their bodies are colored in blacks, browns, dark olive and shades between. Younger snakes will have an hourglass pattern, but older ones look more solid colors. They are considered aggressive and will coil and prepare to strike with open mouth showing the white inside (thus the name “Cottonmouth”). 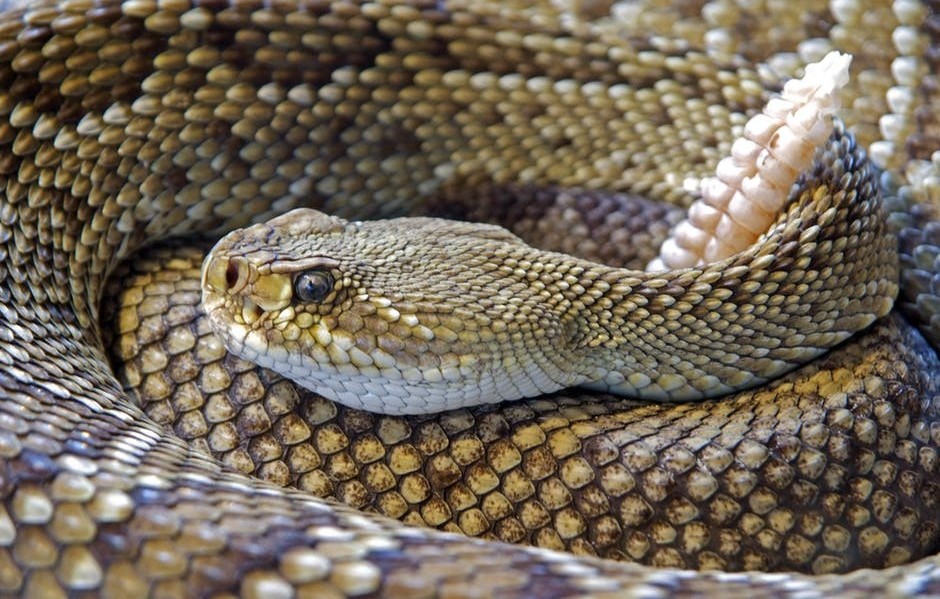 These are the largest venomous snakes in Arkansas.  They are both aggressive and have very potent venom and are considered the most dangerous snakes in Arkansas.  Their eye pupils are verticle and head boxy.  They have a distinctive diamond pattern with white outlines.  They are easily identified by their rattle sound and will coil and make the rattle sound when they feel threatened.

Listen to their rattle sound here. 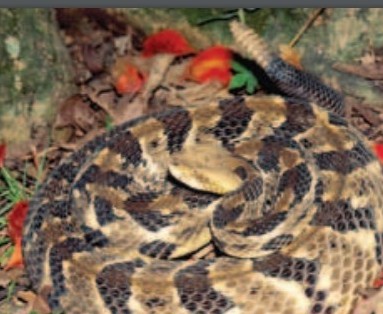 This snake is sometimes called a canebrake rattlesnake or banded rattlesnake (Crotalus horridus)  It is a pit viper.

This is the only rattlesnake species in most of the populous northeastern United States and is second only to its cousins to the west, the prairie rattlesnake, as the most northerly distributed venomous snake in North America.

They typically have a pattern of dark brown or black crossbands on a yellowish-brown or grayish background.  Females often bask in the sun before birthing, so beware of them on trails and rocks.  However their disposition is usually mild and they often perform a good deal of preliminary rattling and feinting before striking. 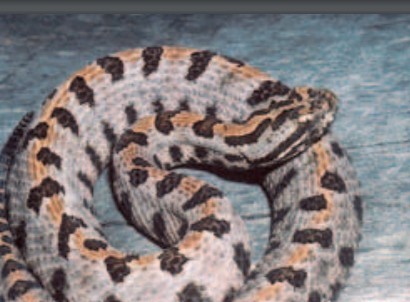 Fully grown at 1 to 2 feet, they are sometimes mistaken for baby rattlers.  Their rattle is small and hard to see and hear from a distance.  They have vertical eye pupils and boxy heads.  They are slate gray in color with a reddish stripe down the backbone and back cross marks.

They enjoy sunning themselves in roads and can range from very aggressive to lethargic.  They make a buzzing rattle sound which is only heard from a few feet away.

It has a small amount of cytotoxic venom that is strongly hemorrhagic and tissue toxic, but devoid of any neurotoxins.  It may not kill an adult human but can deliver a serious wound to a child. 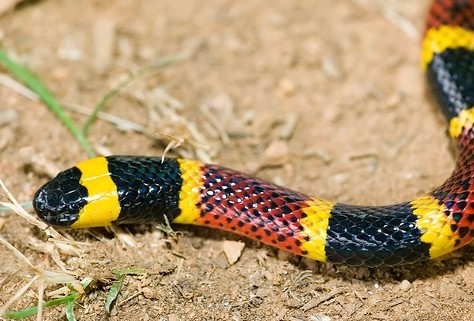 These snakes ave beady eyes and blunt heads (unlike the pit vipers).  They are colored with black, yellow and red bands (the red bands are dotted).  They are in a species, in fact, is an Elapid, whose closest relatives are Cobras, Mambas, and Sea Snakes.  Coral snake venom is highly neurotoxic, but the snakes are generally small, not prone to bite and rarely seen.

You may have heard the saying “if Red touches yellow, it will kill a fellow. Red touches black,  While it is true that the red and yellow bands of this species do touch, childish rhymes should not be trusted for proper identification, as outside of North America the “rules” of this rhyme are broken by numerous Coralsnake species and their mimics.

The Arkansas Game and Fish Commission has a free brochure you can download: Arkansas Snake Guide

Also, here is a printed pamphlet you can order:

You may find snakes anywhere on trails.  They cannot generate their own heat so they like to lay across trails in the sun. And when it is very hot, they can be found in the shade of trees, leaves, and rocks.

Here are some tips:

6.  Wear sturdy boots and consider using trekking poles (the Bella Vista Online Mall has both in the HIKING SHOP

7.  Don’t treat venomous bites, other than to remain calm and return to your vehicle and go to a hospital, (you should call the hospital first and describe the snake).

I enjoy getting questions and comments from site visitors, please leave yours below. -Shirley

NOTE:  This post may contain affiliate links, which, if clicked on and a product purchased, I receive a small commission.

Published in Cycling-Biking and Hiking