How do you play pickleball? 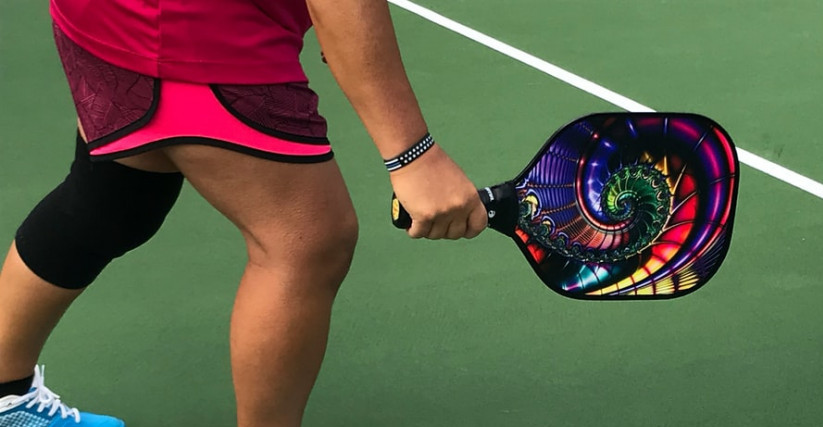 A few months ago, I would be the one asking that question.  I’m not sure I had ever heard anything about “pickleball” before my husband and I moved to Bella Vista, Arkansas in July of 2016.  My husband retired in June of 2016 and we already had purchased our retirement home here in Bella Vista.  Once we closed on the sale of our home in White Hall, Arkansas, we packed up and moved here.  My husband, Mel, lost no time starting to go to exercise at the recreational centers here and scheduling classes several times a week.  I think he heard about pickleball at one of the classes or we learned on Facebook or at the library.  I can’t remember exactly how it can up, but we learned a group played Mon-Wed-Friday mornings at Metfield.  So we decided to check it out.  There was a good group there playing the morning we went to watch.  Mel decided it looked like fun and when we got home he asked me to find a pickleball racket online and order it for him.  So I did.  A few days later, he was up bright and early to join the pickleball players with his new paddle.

That first time, he was just learning some of the rules and how to play the doubles that the group played.  He loved it and found it to be great exercise.  It looked fun to me also.  If I wasn’t in this wheelchair, I would be out there playing.  But I go ever so often and take pics of the group playing to post on facebook.  The group seems to get bigger and bigger and one reason is that my husband invites most people we meet to come to try it out.  Several have and love it too.

I digress, back to What is Pickleball?

According to my research, there are in excess of15,000 indoor and outdoor courts in the United States; and at least one location in all 50 states. Also, there are more than 2.5 million pickleball participants in the United States. I’ve since found that pickleball is kind of a big thing here in northwest Arkansas and watching the men and women play here in Bella Vista, I can understand why.  Its great exercise and very competitive, but not so hard that older people like those in retirement communities can’t participate and love it.

If you have played tennis, badminton, and ping-pong, you can relate to pickleball.

It can be played both indoors or outdoors on a court that is about the size of a badminton court and uses a net like a tennis court. It is played with a paddle (more like a racketball paddle than a tennis one – it is hard and with a plastic ball with holes that is somewhat like a whiffle ball). Pickleball can be played as singles or doubles.  Here in Bella Vista, all play doubles so more people can participate and less grueling physically than singles.

The sport began on Bainbridge Island in 1965.  This is near Seattle, Washington.

The story goes…..Once there were 3 dads, Mr. Joel Pritchard, Mr. Bill Bell and Mr. Barney Mccallum. They invented the game as something for their bored children to do during the summer.  According to Mr. Barney McCallum, Pritchards’ had a dog, Pickles, who loved to chase the ball. So the game got to be called “pickleball”.

Since then, the game has gone from handmade equipment and very simple rules into a sport that is enjoyed all throughout the U.S. and Canada and is making inroads into Europe and Asia even. An industry has grown up around furnishing the equipment for the game during this period too.

The court is sized 20×44 feet and both doubles and singles are played on that court. The net divides the court and is 36″ tall at the sides and 34″ in the middle. Lined like a tennis court with left and right service areas, there is a 7′ area beside each side of the net that is a non-volley area and is called “the kitchen”.  Many former tennis and badminton courts have been converted to pickleball courts and new “specifically designed” pickleball courts are being created.

Equipment needed beside the court and net are paddles and balls.

The Bella Vista Online Mall has a Shop entirely for Pickleball, you can check it out to see some of the products available for Pickleball play.

I love to get questions and comments.  Please leave yours below – Shirley