Learning to Play Tennis for the Absolute Beginner!

Tennis if you have ever stopped to consider what it is, can be called a fairly basic sport. Because of this, virtually anyone can learn how to play successfully, but the hard part is the physical aspect.

In terms of how the game is actually played, there are some basic guidelines that will allow you to play successfully without feeling as if you are lost. Even if you are not interested in playing but merely watching, having an idea about what is going on and why will give you a much better understanding of the game overall.

The game of tennis is played with a racket.  The game may be played individually against a single opponent (singles) or between two teams of two players each (doubles). Each player uses a tennis racket that is strung with cord to strike a hollow rubber tennis ball covered with felt over or around a net and into the opponent’s side of the court. The object of the game is to maneuver the ball in such a way that the opponent is not able to play a valid return. The player who is unable to return the ball will not gain a point, while the opposite player will.

The equipment that is used is a tennis ball, tennis racquet and a tennis court. For each individual player there is also tennis shoes and of course suitable tennis clothes. Otherwise, there is no other equipment that is needed. This makes it a sport that is fairly light to play, unlike football, which has a large amount of heavy equipment that is involved as well.

he tennis court that is used must be a regulation court. This ensures that the overall size and maintenance are all the same so that games are not lost or won based upon the position of a player on a court.

The net goes in the center of the court and on each side there is a service line that runs parallel to the net. Further back on the outer edge of the court there is another set of parallel lines with one on each side of the net, this is called the baseline. This is typically where players start playing.

Along the side of the court are lines that mark the outer edges, and these edges are called the alleys. It is important to understand the difference between singles and doubles now. In singles tennis, the alley is out of bounds and when a ball hits the alley it is immediately out. However, in doubles tennis, the alley is allowed to be used without a penalty. This, as you can imagine, can cause a much different result in a doubles game than in a singles game.

Once the ball has successfully hit the service box, it then looks like tennis that most people recognize from watching on TV. That is the ball is to be hit back and forth across the tennis court until a player fails to hit the ball back across, or it hits the alley in a singles tennis match. In order to score points, you must not hit the ball into the alley or the net and you must always hit the ball when it comes to you. If you fail to hit the ball and your opponent continues to hit it then you will not gain a point but they will.

Each time the ball is missed, it will need to be served again , and for each time it is served the players will take turns serving. This will allow both players to serve equally during the game.

A tennis game consists of a sequence of points played with the same player serving. A game is won by the first player to have won at least four points in total and at least two points more than the opponent.

The running score of each game is described in a manner peculiar to tennis: scores from zero to three points are described as “love“, “15“, “30“, and “40“, respectively. If at least three points have been scored by each player, making the player’s scores equal at 40 apiece, the score is not called out as “40–40”, but rather as “deuce“.

The score of a tennis game during play is always read with the serving player’s score called out first. In tournament play, the chair umpire calls the point count (e.g., “15-love“) after each point. At the end of a game, the chair umpire also announces the winner of the game and the overall score.

A set consists of a sequence of games played with service alternating between games, ending when the count of games won meets certain criteria. Typically, a player wins a set by winning at least six games and at least two games more than the opponent. If a player has won six games and his opponent five, an additional game is played. If the leading player wins that game, the player wins the set 7–5. If the trailing player wins the game (tying the set 6–6) a tie-break is played. A tie-break, played under a separate set of rules, allows one player to win one more game and thus the set, to give a final set score of 7–6. A “love” set means that the loser of the set won zero games, colloquially termed a ‘jam donut’ in the US.  In tournament play, the chair umpire announces the winner of the set and the overall score. The final score in sets is always read with the winning player’s score first, (e.g. “6–2, 4–6, 6–0, 7–5”).

A competent tennis player has eight basic shots in his or her repertoire:

The serve is a shot to start a point. The serve begins with the player tossing the ball into the air and hitting it (usually near the apex of its trajectory) into the diagonally opposite service box without touching the net. The serve may be hit under- or overhand although underhand serving is rarely used.  If the ball hits the net on the first serve and bounces over into the correct diagonal box then it is called a “let” and the server gets two more additional serves to get it in. There can also be a let if the server serves the ball and the receiving player isn’t prepared.  If the server misses his or her first serve and gets a let on the second serve, then they get one more try to get the serve in the box. 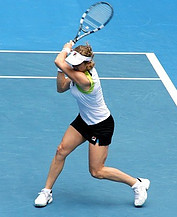 For right-handed players, the backhand is a stroke that begins on the left side of their body, then continues across their body as contact is made with the ball, and ends on the right side of their body. It can be executed with either one hand or with both and is generally considered more difficult to master than the forehand.

A volley is a shot returned to the opponent in mid-air before the ball bounces, generally performed near the net, and is usually made with a stiff-wristed punching motion to hit the ball into an open area of the opponent’s court.

The half volley is made by hitting the ball on the rise just after it has bounced, also generally in the vicinity of the net, and played with the racket close to the ground.

When an opponent near the net hits a hard serve-like overhead shot to try and score instantly.

If an opponent is deep in his court, a player may suddenly employ an unexpected drop shot, by softly tapping the ball just over the net so that the opponent is unable to run in fast enough to retrieve it.

Bella Vista has its own Kingsdale Tennis Center on Riordan Road.

The Kingsdale Tennis Center provides eight well-lit and maintained full-size tennis courts and a private enclosed backboard for year-round play in Bella Vista.  The center features a tennis pro shop which includes a kitchenette, clean bathroom, shower facilities, tennis racquets, racquet stringing, shoes, and accessories.  Outside the pro shop there is a patio and above it lies an observation deck from which you can view all of the tennis courts. Four on-staff tennis professionals are available for instruction.  The Kingsdale Tennis Center offers a diverse program that accommodates any age, skill set or schedule and provides a full schedule of events throughout the year.  Lessons are available for all ages and may be taken as singles, couples, groups, and families.  For more information, call (479) 855-8174.

There are also tennis courts at the Metfield and Branchwood Rec Centers.

Unique Tennis Technique Video Coursess.  This is a course for Advanced Recreational And Competitive Tennis Players That Helps Them Develop Better Stroke Technique With Simple Drills And Exercises.

Tennis is a popular sport in the US and requires little equipment.  It is a very physical sport though and has some basic rules and techniques to learn.  You can learn how from instructions or even from online videos and training. The Bella Vista Online Mall has a “TENNIS SHOP” that offers various products related to the game of tennis.

I love to receive comments and questions from my site visitors, please leave yours below.  Also if you enjoyed this post, please share with your friends. -Shirley

NOTE:  This post contains affiliate links, which, if clicked and an item purchased, I receive a small commission.