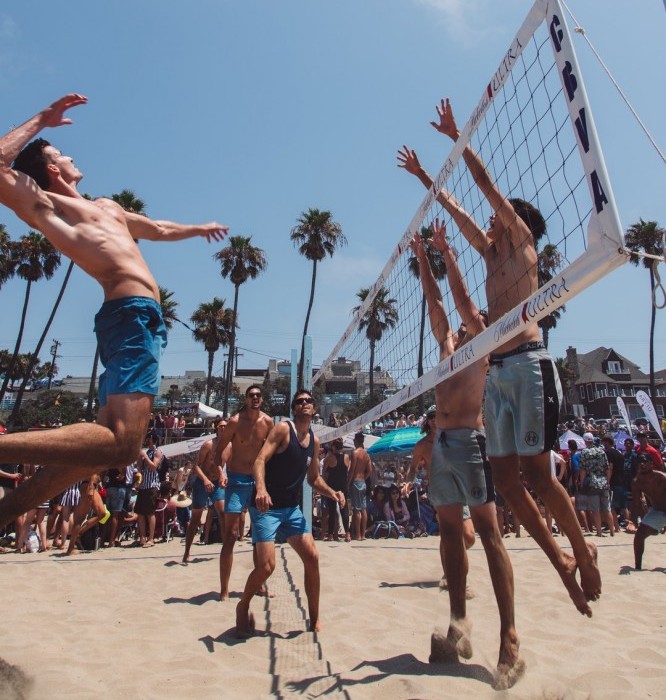 Playing volleyball will exercise you both physically and mentally.  Volleyball exercises many parts of your body and encourages players to develop individual skills through practice and drills and also to work well together with the others on their team to execute “plays”and earn points against their opponents.  Playing Volleyball will improve your balance, your hand-eye coordination and will definitely enhance your reflexes.  In addition, playing volleyball for 45 minutes can burn around 585 calories.

I found that volleyball is fun for me because it is both an individual and a team sport.  Learning how to serve, pass, set, spike and block well are individual skills you can practice for yourself.  But playing as a team with rules and working to get a good “pass to the Setter”, a well placed “set”, and an awesome “hit or spike” by the third player is the most fun of all.  There is nothing like setting up a “play” between 2 or 3 players and making a point or sideout with a well-executed  set up for “spike” or “tip”.

Skills You Need to Learn

When playing with 6 players (3 in the front and 3 in the back on each team), the back right player will serve from just outside the back right of the court line.

Bring your hitting arm back, then shift your weight from the back foot to the front, stepping into the serve as you make contact with the ball at the highest point of the toss and keep your striking hand moving straight into the ball from the cocked position.  Aim for just below the center of the ball, with your five-point contact and continuethe forward motion with your striking hand after you strike the ball solidly, following through with the strike toward the ground.

Watch this  Serving Video to see this action for yourself.

The basic move when receiving the served ball is called a “pass” or “bump.”  It is called a “dig” when you are use the same technigue when dealing with an attack (spiked ball).  Passing is a very important part of the game.  Your team must be able to pass correctly in order to return any serve or set up a good attack against your opponents.

Put your body in the “Ready position”

Watch this Passing Video to see this action for yourself.

The set or overhand pass is typically the second touch of the ball after receiving the served ball from the opposing team.  The first touch is the pass or bump to the “settter” player.  The set is the touch that “sets” up the ball to a  third teammate to “spike” or attack the ball toward the other team with the intention of making a “point”.

Spiking (an attack skill) is the technique of sending the ball over the net with power your opponent’s court. Attacks include taking 2-4 steps to approach toward the net, making a vertical hump to hit the ball. This approach and hit (known as a SPIKE) is an exciting part of a Volleyball game. When playing with 6 players, the spiker is a typically a front row player and their main job is to spike balls over the net into the opposing team’s side of the court.

The Bella Vista Online Mall has a special “Volleyball Shop” where equipment, including training aides, have been suggested to help your Volleyball Game.  Check it out HERE.

Thank you for visiting our site and reading this post.  We enjoy questions and comments, please leave yours below.  Also, you can sign up for our email newsletters to receive the latest news about what’s going on in the Mall.  Sign up HERE.  When you sign up for our email, your name will automatically be entered into our monthly drawing for a egift card.  -Shirley