Meeting a Bob Cat on the Road

My husband and I were driving our “new to us” convertible around the backroads this past weekend and we drove into southern Missouri, just north of Bella Vista.  At one point, we turned a corner on a country road and saw in front of us a streak of grey crossing the road.

We both exclaimed “Bob Cat!” at the same time.  His ears were back and his body was laid out almost horizontally in the air as he leaped across our path.  It was getting darker and he looked grey to me in that light.  Mel and I both said that was the first time we had seen a bobcat in the wild.  I was so excited and wished I could have captured an image but he was too fast.

I had read on Facebook of sightings of these cats in the perimeters of Bella Vista but had never seen one myself.  After I got home I was thinking about the sighting and decided to find out more about this creature.

I found out that it could have been either a box cat or a lynx. Bobcats and Lynx are actually two separate species but belong to the same genu – the Lynx genus.

This genus has 4 separate species in it:

The Lynx can be a larger cat of 80 pounds, but the bobcat generally is more like a large housecat with tufted ears, a short tail, and longer cheek fur.  They weight from 20-28 pounds.  They can be up to 23 inches tall and 41 inches in length.  They have a lifespan of 12 or 13 years in the wild and can live up to 20 years in captivity. 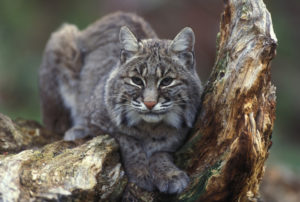 Prized for its fur

The fur of both the Lynx and Bob Cat is prized and the European Lynx and the Canadian Lynx are endangered species because of fur hunting.  The Bob Cat of North America is maintaining its numbers.  I agree the pelt is beautiful but I think I would settle for a synthetic one rather than real fur just to preserve these beautiful animals.

Bobcats are loners and can be very territorial, especially the females.  They find dens in a rock shelter, caves, brush piles and hollow logs.  Mating is typically winter with a 2-month gestation.  Usually, there are 1-6 kittens born.  At 2 months they will begin eating solid food.

There are over 1 million bobcats in North America and you can see many in zoos and maybe you too will be fortunate enough to see one in wild.  The Ozarks are a great place to site them.

Thank you for visiting the Bella Vista Online Mall and this post.  I welcome comments and questions.  You can leave yours below – Shirley

NOTE: Some links on this page are affiliate links, which, when clicked and an item purchased, I receive a small commission.